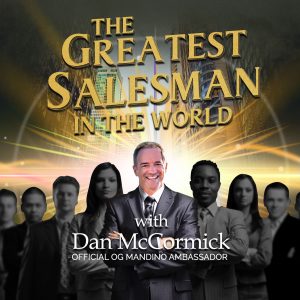 I was not delivered into this world in defeat, nor does failure course in my veins. I am not a sheep waiting to be prodded by my shepherd. I am a lion and I refuse to talk, to walk, to sleep with the sheep.

The slaughterhouse of failure is not my destiny.

If these words sound familiar to you, then you have read The Greatest Salesman in the World by Og Mandino.

The principles from The Greatest Salesman in the World are timeless. No matter where you are in your life – from the darkest night in your life to the brightest sunset – they will teach you how to navigate the seas.

Now, we bring these same principles, habits, and reference points to you in a podcast showcasing the greatest salesmen in the world and their stories of hope and resilience.

The Blueprint For Living with Lisa Grossmann

The Journey To Personal Growth with Freddy Elias

Most of our life is spent in preparation for the next wave of growth that’s going to come for our life or our journey. For former professional bodybuilder and million-dollar earner in network marketing, Freddy Elias, personal growth didn’t come until he was 26 when he was introduced to the teachings of Zig Ziglar. From bodybuilder and nutrition store owner,
Read More

Persist Until You Succeed: The Principle To Rise And Raise Others With Danelle Delgado

“I will persist until I succeed.” This is one of the many scrolls guest and the “millionaire maker”, Danelle Delgado, lives by. Having been featured in Forbes Magazine for being a “single mother [who] used her winning attitude on life to build a multimillion-dollar business”, Danelle sits down with Dan McCormick to share with us how she uses Og
Read More

Finding Your Self-Worth with Robert Hollis

Are you finding yourself constantly sabotaging things? Perhaps it’s because you don’t love yourself. Today’s guest, Robert Hollis, says that when you don’t love yourself, you could never attract the same. Robert lost his identity when he lost the ability to function as a mechanic. In his lowest of lows, his mentor introduced him to Og Mandino’s book, The
Read More

From Entitlement To Personal Power with David Moses

Definitely one of the greatest salesmen in the world, David Moses’ team has produced billions of dollars in revenue. David is recognized as one of the most dynamic business mentors, speakers, trainers, and success coaches in the direct sales industry. He attributes this success to his realization that he is not entitled to anything but has to make it on
Read More

To make a goal come true, you need to be more confident, aggressive, or even patient – depending on your personality – and visualize your success. On today’s show, join Dan McCormick as he interviews The Greatest Yo-Yo Salesman, Alan Nagao. Born in 1962 with serious birth defects, Alan has a passion for the yo-yo and was very skilled
Read More

The Mindset Of A Servant Leader with Darren Rude

A fourth-generation entrepreneur in the grocery industry, Darren Rude was trying to figure out the direction his career was going and looking for a different opportunity when he came across the book called The Greatest Salesman in the World, which directed him to his next vehicle of success – Youtheory, one of the original collagen supplement brands. He joins Dan
Read More

Shaped by creativity, optimism, and courage, Cara Brook created Maskcara Beauty to share her love of beauty. Cara is a beauty blogger and makeup artist who believes that makeup should be used to enhance the true beauty in a woman’s face, rather than covering it up. On today’s show, she joins Dan McCormick to talk about how she built Maskcara and what she
Read More